May the Lord Jesus Christ be with us all in this dark hour!

We have a new book called "I Just Wanted More Land - Jabez" by Gary Gilley.  This is a review of the book "The Prayer Of Jabez" by Bruce Wilkinson.  "The meteoric rise in popularity of Bruce Wilkindson's compact book, The Prayer Of Jabez, had taken the church, and the country, by storm.  Having already sold millions of copies, it may become the best-selling Christian book of the last one hundred years.  In this book, pastor and author Gary Gilley takes issue with Wilkinson's message. He believes the message, although will meaning, is unbiblical and threatens to do incalculable damage to the church."  To order the book online for $8.99 + $3.20 S/H, go to this link:

If you wish to subscribe to the DITC e-Newsletter, you can subscribe by clicking on the following link:

If you wish to unsubscribe simply send an e-mail to: ditc@hotmail.com and put "Unsubscribe" in the subject area.

The feature in this issue is called "Is Allah The Same As YHWH?" by Sandy Simpson, 9/17/01. This article is in response to the current state of affairs in the world and a reminder of the difference between Islam and biblical Christianity.  Apparently many people have forgotten what Islam believes and what their agenda is all about in a rush to try to bring some kind of interfaith unity together.  As a Bible-believing Christian there is no way to reconcile with Islam.  We must preach the gospel to them because without it they cannot be saved.  We must not join in praying to their god, Allah, because he is clearly not YHWH, as evidenced in their own Quran.

Is the god of Islam, Allah, the same as the God of Israel and Christianity, YHWH?  Does Allah have a son?  Does YHWH have a Son?  What other teachings from the Koran show that Islam is a different religion than biblical Christianity?  Here is a side by side chart that might prove helpful in your research on this subject.

But just before we show the chart, it might be helpful to see where the Roman Catholic religion currently stands on this subject. First a picture of the Pope Kissing The Koran: 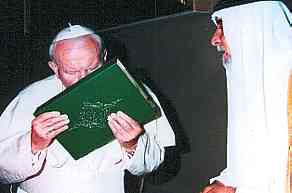 then a quote from the Catholic Catechism:

(841) The plan of salvation also includes those who acknowledge the Creator, in the first place amongst whom are the Muslims; these profess to hold the faith of Abraham, and together with us they adore the one, merciful God, mankinds judge on the last day. (Catholic Catechism, pgs. 242, 243)

So Roman Catholicism clearly denies the only means of salvation which is through Jesus Christ's attonement on the cross and resurrection alone, because Islam denies that Jesus Christ is God and that he was crucified.  It will be shown that Islam denies all the core doctrines of Christianity, namely the Triune nature of God (denied), the dual God-man nature of Christ (denied), salvation by grace alone through faith alone in Christ alone (no crucifiction), the absolute authority of the Scriptures (the Quran added), and the bodily return of Christ to rule and judge the earth (no mention therefore no hope).  Now that we've shown what the RCC says on this subject, let's compare biblical Christianity with Islam: