Greetings in the Lord Jesus Christ!

The feature article in this DITC e-Newsletter is "Feeding Sheep or Amusing Goats?" by Charles H. Spurgeon, 1834-1892.  It is amazing that back in the mid 19th century the problems now come to full flower in the "Church Growth Movement" had already cause theologians like Spurgeon to write these types of articles.  The bottom line is that you can't "schmooze" people into the Kingdom.  The only way people can be born again and become mature Christians is by the truth being taught and demonstrated to them.

Apologetics Coordination Team (ACT) in cooperation with a number of other ministries, is excited to bring you another apologetics discernment conference in Honolulu on December 5-6, 2003.  Click on the graphic below to read it in Adobe Acrobat .pdf format. 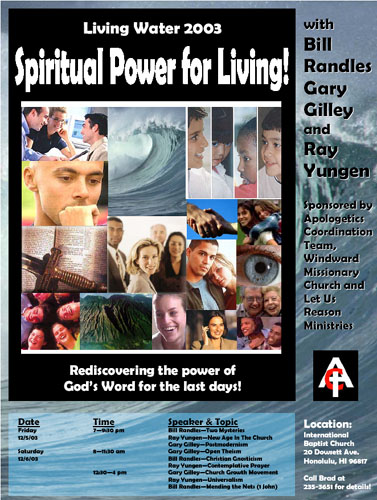 Check It Out! BOOK REVIEWS PAGE

Check out our new Book Reviews page on DITC.  It is an alphabetical directory of book, video, newsletter and course reviews by title.  This is a handy research guide of reviews by the best apologist authors.  Check the What's New! page at DITC often for new book reviews.


An evil is in the professed camp of the Lord, so gross in its impudence, that the most shortsighted can hardly fail to notice it. During the past few years it has developed at an abnormal rate, even for evil. It has worked like leaven until the whole lump ferments. The devil has seldom done a cleverer thing, than hinting to the Church that part of their mission is to provide entertainment for the people, with a view to winning them. From speaking out as the Puritans did, the Church has gradually toned down her testimony, then winked at and excused the frivolities of the day. Then she tolerated them in her borders. Now she has adopted them under the plea of reaching the masses.

My first contention is that providing amusement for the people is nowhere spoken of in the Scriptures as a function of the Church - if it is a Christian work why did not Christ speak of it? 'Go ye into all the world and preach the gospel to every creature'. That is clear enough, so it would have been if He had added, 'and provide amusement for those who do not relish the gospel'. No such words, however, are to he found. It did not seem to occur to Him. Then again, 'He gave some apostles, some prophets, some pastors and teachers, for the work of the ministry'. Where do entertainers come in? The Holy Spirit is silent concerning them. Were the prophets persecuted because they amused the people or because they refused? The concert has no martyr roll.

Again, providing amusement is in direct antagonism to the teaching and life of Christ and all His apostles. What was the attitude of the Church to the world? 'Ye are the salt', not the sugar candy - something the world will spit out, not swallow. Short and sharp was the utterance 'Let the dead bury their dead'. He was in awful earnestness!

Had he introduced more of the bright and pleasant elements into His mission, He would have been more popular when they went back, because of the searching nature of His teaching. I do not hear Him say, 'Run after these people, Peter, and tell them we will have a different style of service tomorrow - something short and attractive with little preaching - we will have a pleasant evening for the people. Tell them they will be sure to enjoy it. Be quick, Peter, we must get the people somehow!' Jesus pitied sinners, sighed and wept over them, but never sought to amuse them. In vain will the epistles be searched to find any trace of the gospel of amusement. Their message is. 'Come out, keep out, keep clean out' - anything approaching fooling is conspicuous by its absence. They had boundless confidence in the gospel and employed no other weapon.

After Peter and John were locked up for preaching, the Church had a prayer meeting, but they did not pray, 'Lord, grant unto thy servants that by a wise and discriminating use of innocent recreation we may show these people how happy we are'. If they ceased not for preaching Christ, they had not time for arranging entertainments - scattered by persecution they went everywhere preaching the gospel. They turned the world upside down, that is the only difference! Lord, clear the Church of all the rot and rubbish the devil has imposed on her and bring us back to apostolic methods.

Lastly, the mission of amusement fails to effect the end desired. It works among young converts. Let the careless and scoffers, who thank God because the Church met them half way, speak and testify. Let the heavy laden who found peace through the concert not keep silent! Let the drunkard to whom the dramatic entertainment had been God's link in the chain of their conversion, stand up! There are none to answer! The mission of amusement produces no converts.

The need of the hour for today's ministry is believing scholarship, joined with earnest spirituality, the one springing from the other as fruit from the root. The need is Biblical doctrine, so understood and felt, that it sets men on fire.

Is there a thing of which it may be said, See, this is new?